We like to welcome you on our Fluvia website. We are a young company, operating in the field of international tanker shipping and port logistics. Although the company has only recently been established (2005), its staff members and fellow workers have a long standing know-how and experience in the field of international transport over water and transshipment and storage of liquid cargoes in bulk.

We hope this introduction will lead to a long-lasting relationship, so please don't hesitate to contact us. Have your own experience with Fluvia, the "junior" in liquid bulk logistics with "senior" know-how and above all strives for "peak performance" !

In 2015 Fluvia Tanker Chartering N.V. celebrated its 10th anniversary, although the roots of the company were actually laid nearly four decades ago in 1977. After having been part of major shipping concerns, the company decided in 2005 to proceed independently through a Management buy-out. 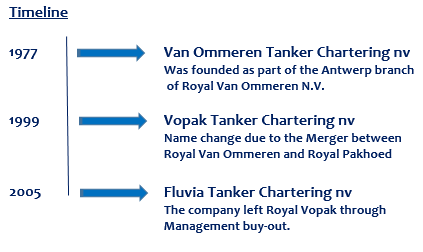 Fluvia Tanker Chartering NV is part of the Fluvia-Holding based at Rotterdam. The Fluvia-offices at Rotterdam, Basel and Hamburg manage a fleet of over 30 inland tankers, carrying petroleum products, biodiesel and chemicals on all European waterways. The philosophy of the company to aim at ‘ Peak ‘ performance has been translated into naming its inland tankers after the highest mountaintops of the world, preceded by the Swiss 'Piz' ( top or peak ).

Same ‘ Peak ‘ performance is the backbone of the Antwerp Chartering Desk. Our company has a young and loyal team of five shipbrokers, specialized in all different grades of liquid bulk cargoes. Although we are not a large brokerage house, the combination of experience, expertise and loyalty is making the difference for our Charterers. The personal follow-up our Principals can take for granted.

Give us a try, and we strongly believe you will be pleased with the results.

arranging isotanks (leasing or including logistics)

coordination of all listed activities

advice and assistance on legal shipping matters, settlement of demurrage and deadfreight claims or disputes

The core of our engine